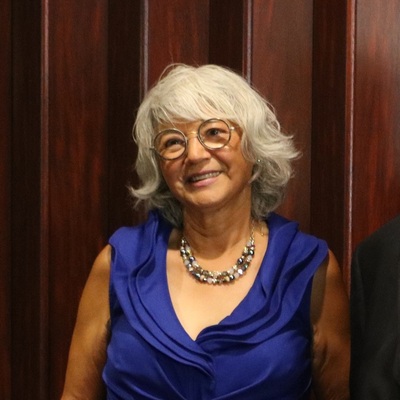 The Saskatchewan Writers’ Guild is proud to announce that the winner of the 2020 Cheryl and Henry Kloppenburg Award for Literary Excellence is Louise B. Halfe – Sky Dancer. The award was announced virtually by Cheryl and Henry Kloppenburg on September 16, 2020, at 12:00 p.m. The award honours a Saskatchewan writer who has written a substantial body of acclaimed literary work and has had a significant impact on writing in Saskatchewan. It carries a prize of $10,000 and a framed limited edition print of a painting by well-known Saskatchewan artist Dorothy Knowles.

Louise Bernice Halfe – Sky Dancer was raised on Saddle Lake Reserve and attended Blue Quills Residential School. Louise is married and has two adult children and three grandsons. She graduated with a Bachelor of Social Work from the University of Regina. She also completed two years of Nechi Training in St. Albert’s Nechi Institute, where she also facilitated the program. She served as Saskatchewan’s Poet Laureate for two years and has travelled extensively. She has served as a keynote speaker at numerous conferences. Her books, Bear Bones and Feathers, Blue Marrow, The Crooked Good, and Burning In This Midnight Dream (published by Coteau Books) have all received numerous accolades and awards. Louise was awarded an honorary degree from Wilfred Laurier University and the University of Saskatchewan.

The jury for the 2020 Award cited the following in choosing Louise: “Louise Bernice Halfe - Sky Dancer's sensual, compassionate, and formally varied poetry has established hers as an important national voice. The lines and languages, Cree and English, reach into Indigenous experience and spin out before us in poems of lament, celebration, and witness. She has long been a mentor for emerging writers and a radiant and inspiring presence in the country's literary community.”

Louise’s nominator noted that “Louise established herself as a professional Indigenous author during a time when support for Indigenous literature was not readily available. Louise is amongst a handful of trailblazers for emerging Indigenous authors today. She is very much our omisimâw (big sister).”

Cheryl and Henry Kloppenburg, lawyers by profession but philanthropists at heart, established this prestigious award in 2010. The three Honorary Patrons of the Award are His Honour the Honourable Russ Mirasty, Lieutenant Governor of Saskatchewan; His Worship Charlie Clark, Mayor of the City of Saskatoon; and President of the University of Saskatchewan, Dr. Peter Stoicheff. The Kloppenburg Award for Literary Excellence is one of the most lucrative provincial awards in Canada.

For more information about this Award, please contact Program Manager Yolanda Hansen at 306-791-7743 or programs@skwriter.com