The SWG Board of Directors

The SWG Board of Directors exists to provide guidance and direction to the SWG at legally constituted meetings. The board, made up of volunteers, is a policy governance board. Meetings consist of decision-making and policy establishment. The board and the Executive Director partner to lead and manage the SWG. In addition, a board member can volunteer to serve on Standing Committees and Board Committees.

The board holds between six to seven meetings a year. Meetings are generally held in person and occur in a variety of locations throughout Saskatchewan.

If you are interested in volunteering your time as a board member, please contact the Past President or the SWG Executive Director for more information. 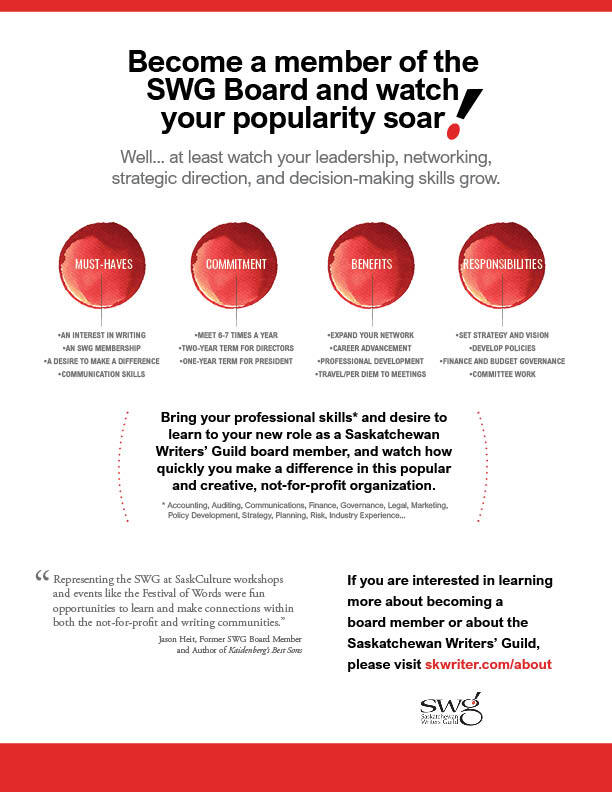 Please click on the picture to see the full PDF.

Nominations will open closer to the next AGM.

The SWG is committed to a collaborative work environment. In support of that commitment, the Executive Director is recognized as a trusted advisor to the board and invited to attend and contribute to all board meetings except when the board holds an in-camera discussion.

There are usually ten members on the SWG Board of Directors, and no more than half of the elected directors reside in one city in the province. There are Board Committees that directors from the board volunteer to chair (Audit, Governance, and Nominations Committees, and special ad hoc committees as they arise).

Current Board of Directors

The office of a Director shall be automatically vacated if:

The Guild’s Annual General Meeting (AGM) is held in conjunction with the Fall Conference. The AGM takes place on Saturday of the Conference and is an event where only SWG members can vote.