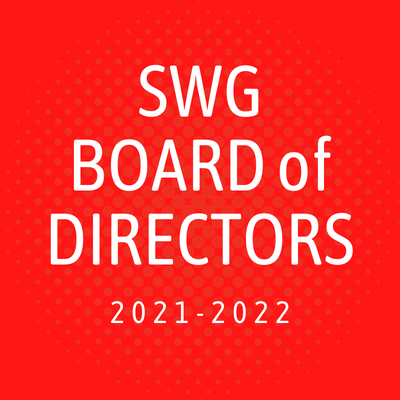 Returning President and New Board Members

We are pleased to announce our returning President and one returning Board Member as well as four new Board Members, who were elected to the Board during our first hybrid Annual General Meeting. They join our existing Board Members Jack Walton - Past President, Dirck de Lint, Margot Johnson, and Heather Winter.

Ashley has spent the past two years as a volunteer SWG board member, including the past year as president. During this time, Ashley has been especially interested in the policy/governance and audit committees, and the SWG Foundation. As a signing authority for the past two years, Ashley has authorized cheques and payments every two weeks at the guild office. Ashley would value a second term as president to continue building upon the board’s work of this past year – including bolstering the Foundation and honing the conflict of interest policy. (She’d also like to experience a meeting, as president, in person instead of live-streamed!)

Ashley worked as a journalist at the Regina Leader-Post for 13 years before taking on a new role this year in provincial government communications. She lives in Regina with her husband, dog and two cats. Aside from reading a lot (she’s a member of three book clubs), Ashley enjoys yoga, gardening and learning woodworking. She is still working up the courage to tackle creative writing.

David serves on several boards: the SWG, the Canadian College of Naturopathic Medicine, and the Buteyko Breathing Educators Association. He is president emeritus of the National University of Natural Medicine (NUNM) in Portland, Oregon and former President of the Canadian College of Naturopathic Medicine in Toronto. He held over many years related positions in higher education and writing: former editor of Quarry Magazine/Quarry Press; founder of CCNM Press, founder of NUNM Press, founder of Crusoe House Press. He earned degrees from the University of Toronto (Ph.D.); the University of Alberta (MA); Queen’s University (BEd); and the University of Western Ontario (BA). Dr. Schleich has published extensively and lectures internationally. His most recent publications: All the Messiahs Agree (Portland, 2019) and The Terms of His Surrender (Vancouver, 2021) He was Contributing Editor to the Naturopathic Doctor News and Review (NDNR) from 2005 – 2020.

Andrew has always had a way with words. From writing his first novel at 13 to his current role as Associate Creative Director at Brown Communications Group, imagination and creativity have always been a part of his life. Andrew has a wealth of experience in creative, digital, and traditional copywriting, as well as strategy, video, and content creation. Having worked professionally as a writer for 8 years, he knows the power of storytelling. Andrew is passionate about creating emotional connections and inspiring real change through his work for clients like the Ministry of Health, SaskPower, Regina Public Library, and the City of Regina (to name a few).

I am a Chartered Professional Accountant and U of S graduate with a B.A. in Sociology. I returned to writing in 2014, but only joined the SWG in 2021. I am an aspiring writer, working toward publication of romance and science-fiction romance novels in the next 2-3 years. I am a member of the Saskatoon Writers’ Club Inc. and serve on the Executive. I have volunteered with numerous not-for-profit and charity boards in various positions including Director, Treasurer, Chair, and Vice-Chair. After a career in accounting and compliance, I now work in the not-for-profit and charitable sector in the areas of finance and administration.

Nicole Kennedy is a Saskatoon-based writer and poet. She has been writing for as long as she can remember, coming up with poems and songs in her head. Her grandmother instilled creativity in her from a very young age, from playing to making visual art, Nicole was immersed in a very creative atmosphere. She is also an advocate for mental health and does speeches with the Schizophrenia Society. If you see Nicole around, she would be very happy to say hi.

Andrea Martineau has a B.A. in English with a Certificate in Public Relations from the University of Regina. She has worked as an intern and event coordinator at Saskatchewan Book Awards and worked on the executive council of the University of Regina English Students’ Association for multiple years. Previously, she served as the Board Secretary for Creative Saskatchewan’s Board of Directors and currently works for the agency as a Program Officer supporting the book publishing industry and other crucial creative sectors. In her spare scraps of time, Andrea writes poetry and short fiction, makes art with her daughter, and meets up with her writing group, The Canty Collective of Writerly Women. Her work has been published in The League of Canadian Poets’ daily Poetry Pause, and Blank Spaces and she volunteers as an interviewer and reader for The Malahat Review.

We thank and congratulate all returning and new Board Members and the returning President and look forward to working with them.