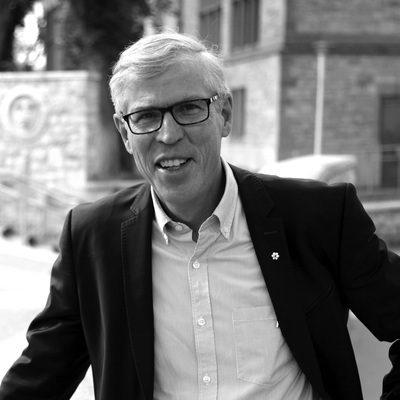 The Saskatchewan Writers’ Guild is proud to announce that the winner of the 2021 Cheryl and Henry Kloppenburg Award for Literary Excellence is Bill Waiser.  The award was announced by Cheryl and Henry Kloppenburg on September 13, 2021. The award honours a Saskatchewan writer who has written a substantial body of acclaimed literary work and has had a significant impact on writing in Saskatchewan. It carries a prize of $10,000 and a framed limited edition print of a painting by well-known Saskatchewan artist Dorothy Knowles.

Bill Waiser is a historian and the author of more than a dozen books. His publications include A World We Have Lost: Saskatchewan before 1905, winner of the 2016 Governor General’s Literary Award for Non-Fiction. In August 2021, at the request of the One Arrow First Nation Elders, Bill launched his most recent book, In Search of Almighty Voice: Resistance and Reconciliation, at the One Arrow First Nation powwow. In a private ceremony in 2005, Bill personally presented a copy of his award-winning Saskatchewan: A New History to Queen Elizabeth II. Bill has been appointed to the Order of Canada, named to the Saskatchewan Order of Merit, elected a Fellow of the Royal Society of Canada, and granted a D.Litt.  Most recently, he was presented with the Governor General’s History Award for Popular Media (the Pierre Berton Award) and the Royal Society of Canada’s Tyrrell Medal for outstanding work in Canadian History.  The Canadian Historical Association has recognized his work with a lifetime achievement award. Bill lives in Saskatoon with his bride Marley, a retired Environment Canada research scientist. In his spare time, he is a recreational runner who also likes to hike, canoe, and garden.

In choosing Bill, the jury for the 2021 Award cited the following: “Throughout his long and accomplished career during which he produced nineteen books, Bill Waiser has focused on chronicling the history and heritage of Saskatchewan. He has done so with passion and enviable skill, employing an accessible style to create captivating stories about events both great and small.” Similarly, his nominator remarked, “Bill Waiser is a writer who has negotiated a difficult path, skillfully melding the demands of the academy with the desire to inform his fellow citizens, and he has done it gracefully and skillfully. His books have enjoyed enormous popularity with the citizens of this province. This is because they are engaging narratives, stylishly rendered in what the great critic Cyril Connolly called the “plain style,” a direct and simple prose that appears to be easy but is notoriously difficult to master. I think he is one of Saskatchewan’s most important and accomplished writers.”

Cheryl and Henry Kloppenburg, lawyers by profession but philanthropists at heart, established this prestigious award in 2010. The three Honorary Patrons of the Award are His Honour the Honourable Russ Mirasty, Lieutenant Governor of Saskatchewan; His Worship Charlie Clark, Mayor of the City of Saskatoon; and President of the University of Saskatchewan, Dr. Peter Stoicheff. The Kloppenburg Award for Literary Excellence is one of the most lucrative provincial awards in Canada.