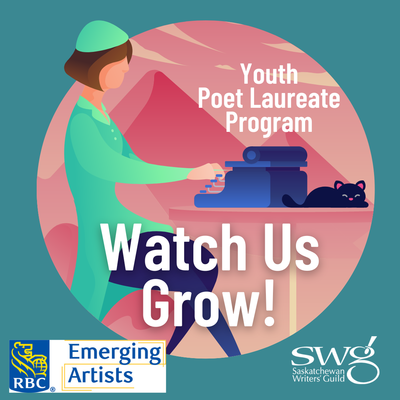 The SWG is pleased to announce that we have received an Emerging Artist donation of $15,000 through RBC in support of our Youth Poet Laureate Program. This donation will be paid out over the next three years at $5,000 per year.

“We thank the RBC and are thrilled to be partnering with them to bring focus to our Youth Poet Laureate Program and raise awareness for emerging poets in Saskatchewan,” says Tracy Hamon, Executive Director, SWG.

Our current Youth Poet Laureate, Lauren (Lo) Klassen is a community-based educator and poet living on Treaty Six territory. Her artistic work often reflects themes “twenty-somethings” like herself encounter through vulnerability and humour. She is one of the organizers of the youth poetry collective Write Out Loud and she works as a teacher in Saskatoon. In her six years of performing, Lo has had the privilege of performing at the national festival Voices of Today in Toronto in 2017, 2018, and 2019. Her poetry has been published in the Sheaf University of Saskatchewan paper and in a national chapbook. She has had the pleasure of opening for Shane Koyczan.

Since 2007, RBC Emerging Artists has been supporting organizations that provide the best opportunity to advance an artist’s career in visual arts, music, theatre, dance, literature and film. Every year the RBC donates millions of dollars to hundreds of arts organizations globally to help emerging artists become established through training, networks, and providing exposure to new and diverse audiences.

In addition to the Emerging Artists, the RBC awards these scholarships and awards: