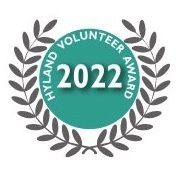 This year, the Saskatchewan Writers’ Guild Board of Directors is very pleased to present the 2022 Hyland Volunteer Award to Ted Dyck.

Ted Dyck is a longstanding SWG member living in southwestern Saskatchewan. Ted has studied at and graduated from a number of colleges and universities: M.Ed. (U of SK 1964); M.A. (Math. Logic, U of Minn. 1973); PhD (English, U of Man. 1988). He has taught at all of the above plus Red Deer College (AB), University of Marburg (GER), Aurora College (Inuvik, NT). At times and in places, he has been a writer (5 books of poetry, some 100 periodical pieces, 3 edited anthologies, 1 collection of non-fiction pieces, etc.); editor (GRAIN, TUSAYAKSAAT, TRANSITION); scholar; mentor; businessman; professor; pseudo-hermit; instructor; brush salesman; ranch-hand; and so on. Ted writes in a number of genres -- poetry, fiction, essay -- and operates a writing, editing, and work-shopping service called WorDoctor.

In recommending Ted for this award his nominator says, “Ted Dyck has been and continues to be an important member of the Sask writing community. He started up several Writing For Your Life groups associated with CMHA [Canadian Mental Health Association] in several communities across the province. Ted believes in the value of creative writing as a means of expression for people suffering with mental health issues. He works tirelessly on behalf of Sask writers… I can’t think of anyone more deserving.”